Death of doctok in LibreOffice 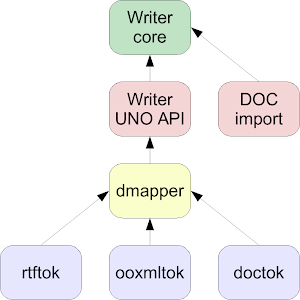 Last year in September we decided to get rid of the writerfilter-based DOC tokenizer, and I volunteered to actually do this. As cleanups in general have a low priority, I only progressed with this slowly, though yesterday I completed it, that’s why I’m writing this post. :-)

Some background: the writerfilter module is responsible for RTF and DOCX import in Writer. As the above picture shows, the currently used DOC import is independent from it, and there was also an other DOC import filter, that was in writerfilter which was disabled at runtime. As I don’t like duplication, I examined the state of the two filters, and the linked minutes mail details how we decided that the old filter will stay, and we’ll get rid of the writerfilter one. It’s just a matter of deleting that code, right? :-) That’s what I thought first. But then I had to realize that the architecture of writerfilter is a bit more complex: 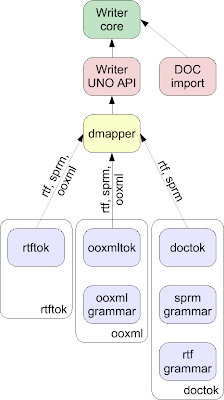 It has the following components:

The traffic between the tokenizers and dmapper is called tokens. Naturally it’s not enough that tokenizers send and dmapper receives these tokens, they should be defined somewhere as well. And that’s where I realized this work will take a bit more time: instead of having a single token definition, actually the ooxml tokenizer defined its own grammar, and doctok also defined two additional grammars. And of course dmapper had to handle all of that. ;-) Given that OOXML is a superset of the DOC/RTF format, it makes sense to just use the ooxml grammar, and get rid of the other two.

Especially that — by now you probably found this out — if I wanted to kill doctok, I had to kill the sprm and rtf grammars as well. Otherwise just removing doctok would break the RTF and DOCX import as well, as those also used the rtf/sprm grammars.

So at the end, the cleaned up architecture now looks like this: 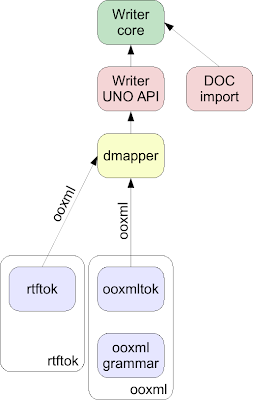 And that has multiple advantages: