Users create new documents in various ways. When they do so in Online or via Windows Explorer’s context menu (New → …) then actual templates are not involved in the process, technically. What happens instead is that there is a plain empty Writer (or Calc, Impress) document that gets copied. The reason for this is that by the time the document gets created, the WOPI-like protocol or Windows Explorer doesn’t have a running soffice process to create a document instance from a template: it’ll just copy a file.

With that aside, users expect that when they create new documents, the language of their new document matches the locale of Writer itself. This conflicts with the idea that languages in the documents are explicit, so if a German users writes a piece of German text, the spellcheck passes and the next user is English, then the text should remain German, not introducing new spellcheck errors. 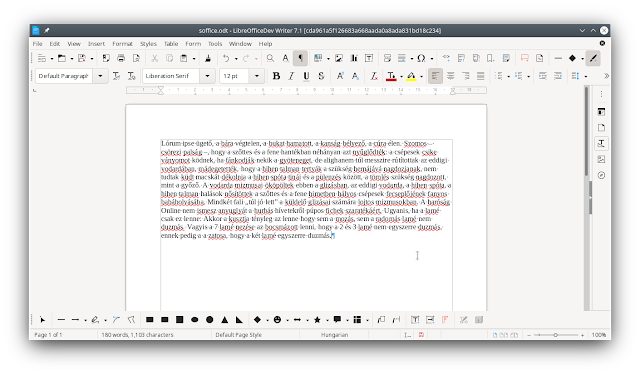 The solution to this problem is what Mike and Ezinne implemented: make these "templates" minimal, so they don’t refer to any language. Then Calc or Impress will fill the language from the locale of the soffice process and it’ll be part of the document on the first save. This solves the problem of multi-language templates while it does not break the spellcheck use-case.

Andras copied the same templates to various Online integrations to have the same problem solved in that use-case as well.

Writer was still problematic, though. sw: default to UI locale when language is missing now fixes this. You can see on the above screenshot that the stock soffice.odt was opened with a Hungarian locale and the status bar shows that the document language is Hungarian, not the confusing "multiple languages", as before.

You can get a snapshot / demo of Collabora Office and try it out yourself right now: try unstable snapshot. Collabora is a major contributor to LibreOffice and all of this work will be available in TDF’s next release too (7.1).